The all-new 2022 BMW 7 Series has spawned the i7 – the German car maker’s sixth and most luxurious electric model to date.

The new i7, due in the UK from December, is BMW's answer to the Mercedes-Benz EQS and Porsche Taycan. It will be sold as part of the eighth-generation 7 Series line-up, alongside more familiar petrol, plug-in hybrid and diesel options.

However, the emphasis is clearly on highlighting its electric capability in the UK, where the i7 xDrive60, with a combined 536bhp from two electric motors and a range of between 367 and 388 miles on the WLTP test cycle, will initially underpin sales before the planned arrival of more traditional diesel and petrol-electric plug-in hybrid models in 2023.

Prices for the i7 xDrive60 start at £107,400, just slightly cheaper than the equivalent version of its iX sibling.

It is not the only i7 model set for UK sale, though. An even more powerful i7 M70 xDrive with 597bhp is set to head the line-up from the middle of next year, promising performance to match the Mercedes-AMG EQS 53.

UK sales kick off with the electric-powered i7 xDrive60. It adopts a similar drivetrain to the iX xDrive60 with two electric motors – one with 252bhp at the front and another with 306bhp at the rear – tuned to develop a combined 536bhp and 549lb ft of torque. BMW claims a 0-62mph time of 4.7sec and a limited 149mph top speed.

BMW says the ‘Gen 5’ electric powertrain includes motors that do not contain any ‘rare earth’ materials and that the battery cells have been manufactured using ‘green energy’.

In combination with a 101.7kWh lithium ion battery mounted within the floorpan, it also delivers combined consumption of between 18.4 and 19.6kWh/100km, giving it an official range of between 367 and 388 miles on the WLTP test cycle. BMW also says that it went to great lengths to ensure that the ‘best and worse case’ range scenarios for the new electric i7 were as close together as possible. The company is claiming a difference of just 75km in range or a variation of just 12%.

Charging can be achieved at up to 11kW on an AC system and at up to 195kW on a DC system, with BMW claiming a 10-minute charge on the latter can add as much as 106 miles to the range.

The company claims the i7's charging hardware has been improved over that of the existing CLAR-based i4 and iX EVs, meaning the temperature of the battery can be "controlled more precisely" and giving quicker and more detailed information about chargers on a given route via the sat-nav.

BMW says "a charging-optimised route is calculated as soon as the destination has been entered" if it calculates that the remaining range in the battery is insufficient for the journey.

The adaptive regenerative brakes have been upgraded, too, and can now take into account any downhill sections or traffic lights on a planned route, to ensure optimal power regeneration on the fly.

The i7 xDrive60 is fitted as standard with adaptive, self-levelling air suspension all round, which lowers by 10mm in Sport mode and at speeds of more than 75mph for maximum stability. It can also be raised by 20mm to clear tall obstacles or rough sections of road.

BMW has yet to provide full details of the electric-powered i7 M70 xDrive range-topping model. However, officials have revealed to Autocar the Mercedes-AMG EQS 53 rival is planned to run a more heavily tuned version of the i7 xDrive60 twin-electric-motor drivetrain developing 597bhp together with “a big increase in torque”.

As with the electric BMW i4 and its combustion-powered BMW 4 Series sibling, the i7 is marked out from the 7 Series only by subtle styling cues that nod to its zero-emission drivetrain.

There are a number of blue accents throughout, for example, and the logo of Munich's i EV brand features on the expansive front grille.

It's identical inside, too, which means it gets the eighth generation of BMW's iDrive infotainment platform, running through a 14.9in curved central touchscreen and a 12.3in digital gauge cluster - though a rotary control remains on the centre console. 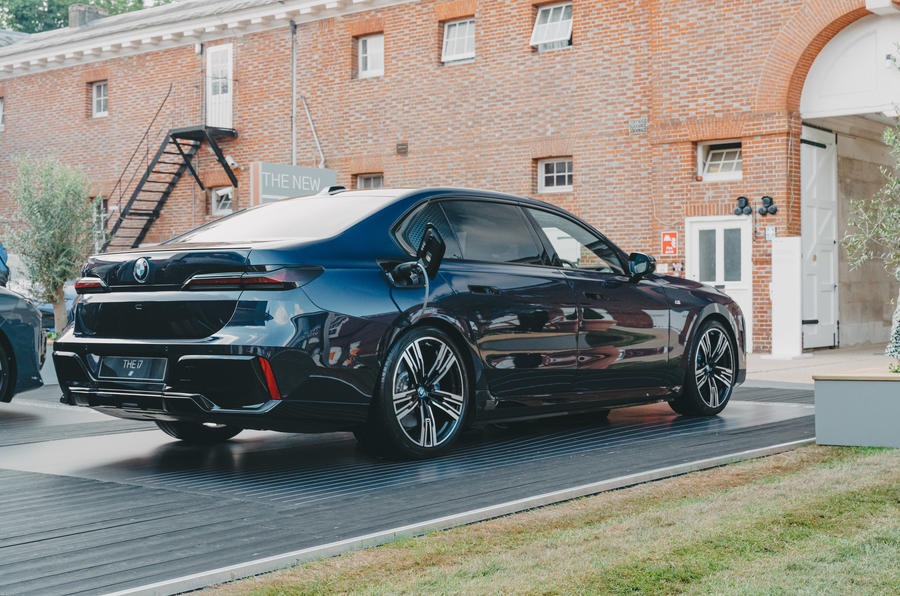