First Contact: We Got Hands-On With the 2023 BMW i7 in Production Spec

BMWBMW i7
Less than two months ago, BMW revealed the first i7, which is the all-electric version of the 7 Series. For the first time since the "i range" made its debut, one of its members is the same size as its direct correspondent in the regular BMW portfolio. But this article is not about that, but about our first encounter with it.

Yes, we might be a bit late to the party, as the 7 Series, along with the corresponding i7, were revealed just shy of two months ago, and a couple dozen journalists already checked them out last month. Well, better late than never, right? Now, let us move on to business.

The BMW i7 was unveiled in front of us in a Bang & Olufsen showroom, and the car was then made to do its party trick. It has several of those, and the first one that we saw was the ability to open all its doors at the press of a button. In addition, the doors have sensors, so they will stop before hitting anything.

Be careful, though, and do not stand in their way when closing. While there is a sensor there, which may stop them from hurting you, we would not bet the integrity of our fingers or limbs on its ability to stop the doors from closing.

Moreover, on top of that ability, the i7 can also close an individual door using voice commands. For example, someone could get inside it and say, "Hey BMW, close my door." The vehicle will figure out where the sound is coming from, and it will close that door.

We are surprised that the German manufacturer has not yet implemented a seat belt carrier that will gently push your belt from the pillar towards your shoulder and then retract when you open the door and unlatch the belt. Yes, BMW, feel free to implement that idea whenever.

Another party trick that some i7 and 7 Series models will be able to perform if they have been ordered accordingly involves a massive screen that drops from the roof, and it then obstructs what was left of the view ahead for the rear occupants. The screen appears to be a high-resolution unit, and it can play movies and such, but it probably works for video conferencing just as well.

There are two smartphone-like control devices integrated into the rear door cards. They offer controls for the said screen, and there is also a Fire TV app, as well as other comfort/leisure apps.

With all that technology, we are surprised to see that BMW still has its rearview camera left in the open, integrated into the rear logo, while the trunk opening is activated via a regular button in plain sight. And looks ugly on such a luxurious vehicle.

Another element that we appreciated is the fact that the steering wheel still has conventional buttons on it, not just touch-sensitive surfaces. The latter has become an industry-wide trend, and it is widely believed that they are cheaper to manufacture than conventional buttons, which would explain many things on this matter.

Speaking of materials and finish quality, this vehicle was a close-to-production prototype, which means that some materials were exactly as they would be on the production car, but some finishes or other materials were not.

What we touched and felt seemed of high quality, as expected with a vehicle of this class. It does feel like a step up from the old 7 Series, which was getting closer to the S-Class in certain aspects regarding the quality of materials, and the difference between them was even smaller than it previously was.

The i7 and its 7 Series brothers will come with an advanced ambient lighting system, which is claimed to be better integrated with the vehicle's modes, as well as with advanced wellness functions.

So, if you wish to calm down or feel energized, you can ask this from your car in plain English, and it will adapt itself accordingly. Some of those features were possible before, but now the ambient lighting has been enhanced even further.

Expect the copycat experts from what is currently the world's biggest car market to develop aftermarket retrofit solutions for lesser models soon.

They will not look as good, but that will not stop some people from attempting to “bedazzle” their rides with all the lights, bells, and whistles they can buy online for next to nothing.

If we are still in the prediction area, the same thing will happen with grille lighting elements. It will be a matter of time until they pop up for sale online for all kinds of BMWs, and not just BMWs, so that anyone will be able to make their front grille illuminated, just like nobody intended.

Another interesting element is that the vehicle looks significantly better in real life than in official photos, not to mention the photos I took.

The example in question had a two-tone paint job, with the lower part of the body in dark blue while the upper part was black. There was an interrupted black line between them to simulate the "coach line," which is something that you see on a Rolls-Royce, but without making it a coach line. Smart move, BMW, I'll give you that.

It can be ordered in a single color, as well, so do not worry. The lower lights are far better concealed than you might think, and the same can be said about some elements of the grille.

If you get your i7 in a dark shade, it might look good, but we would not be able to say the same about a White or Silver one, at least not until we see one in real life. From there, it might be a matter of personal taste, but it looks reasonably good in black and dark blue.

Now, we can't wait to drive it, as it is even more promising than it was at first glance, but we have at least six months of waiting until its market release. 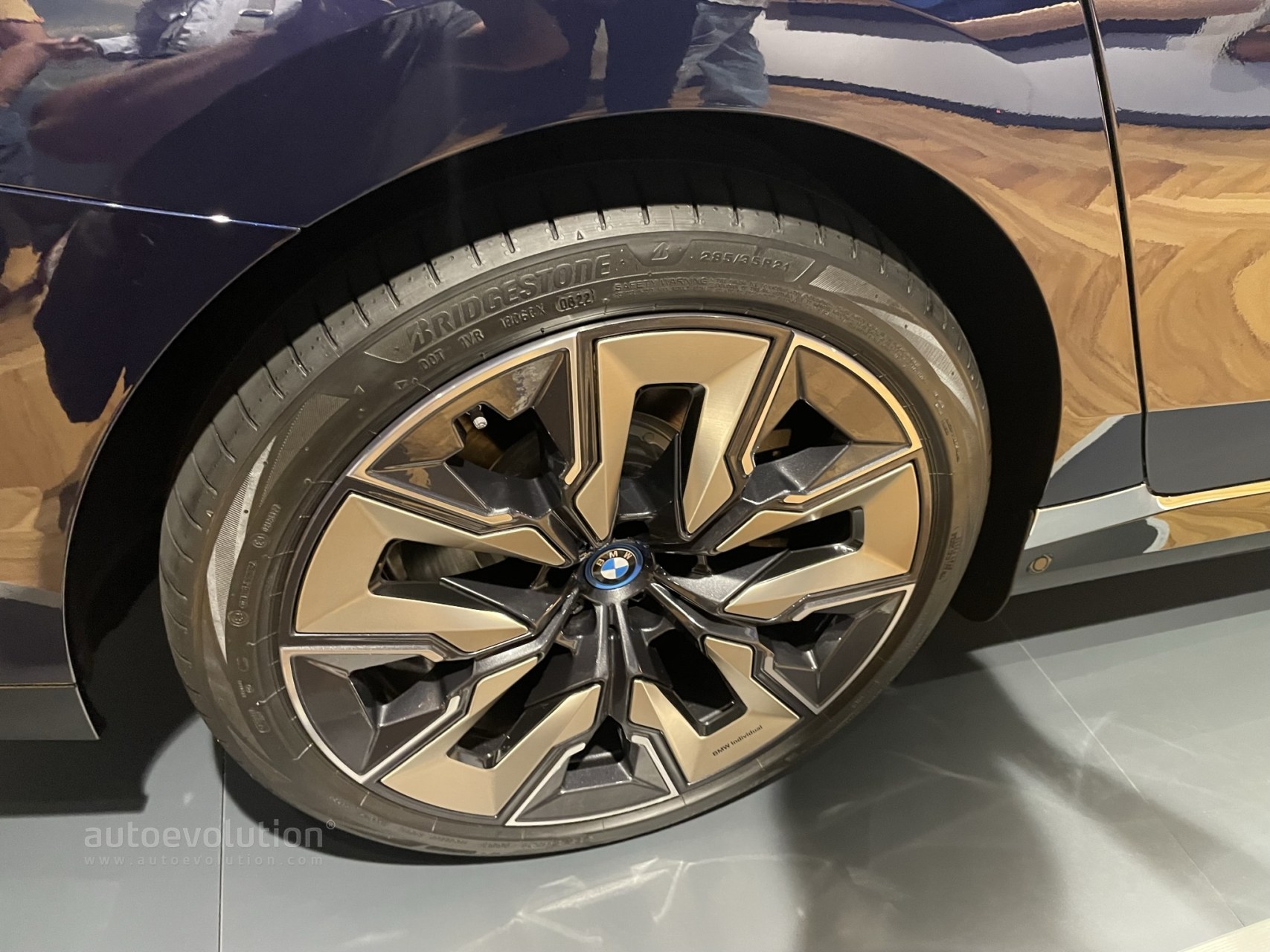 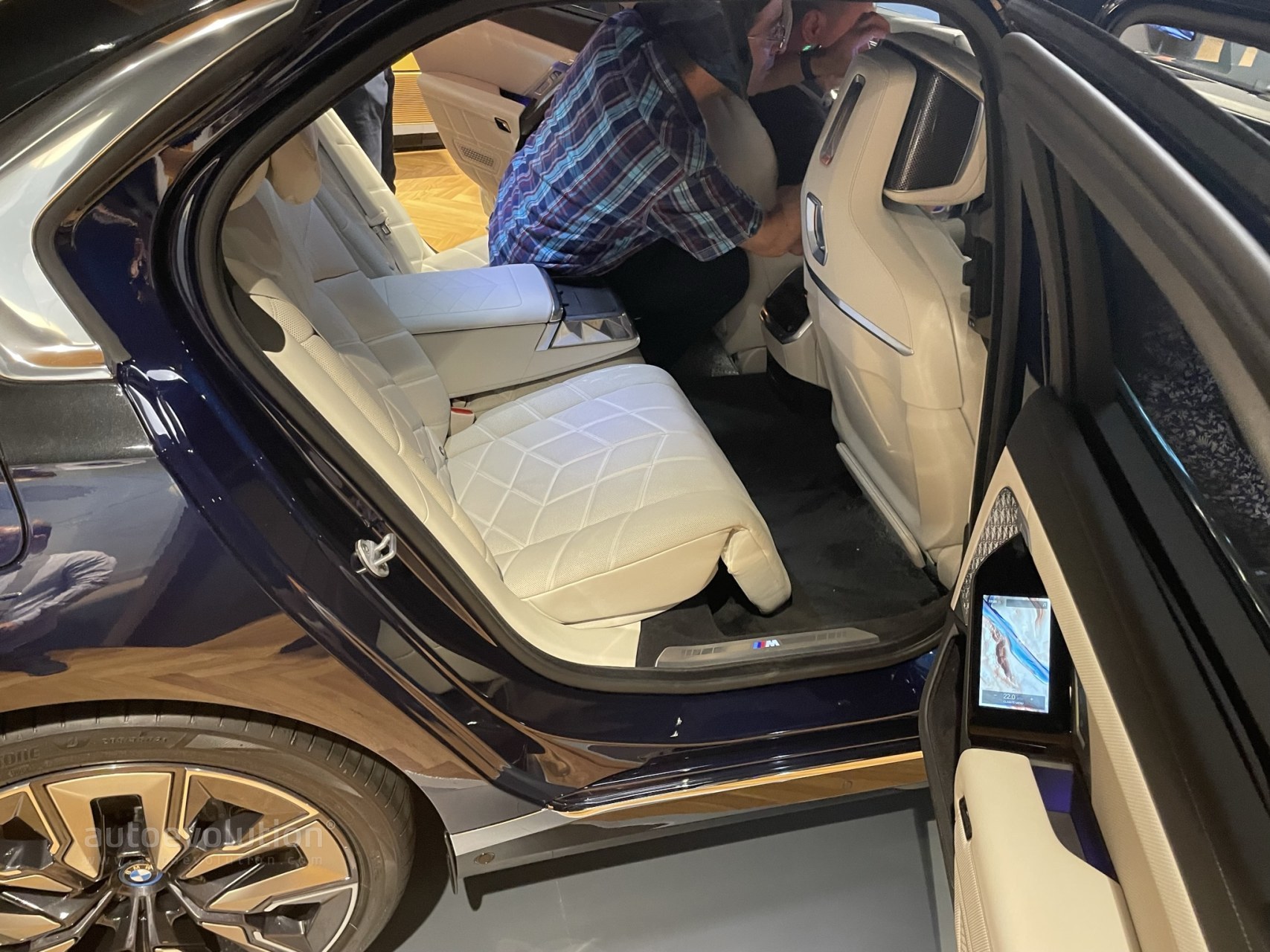 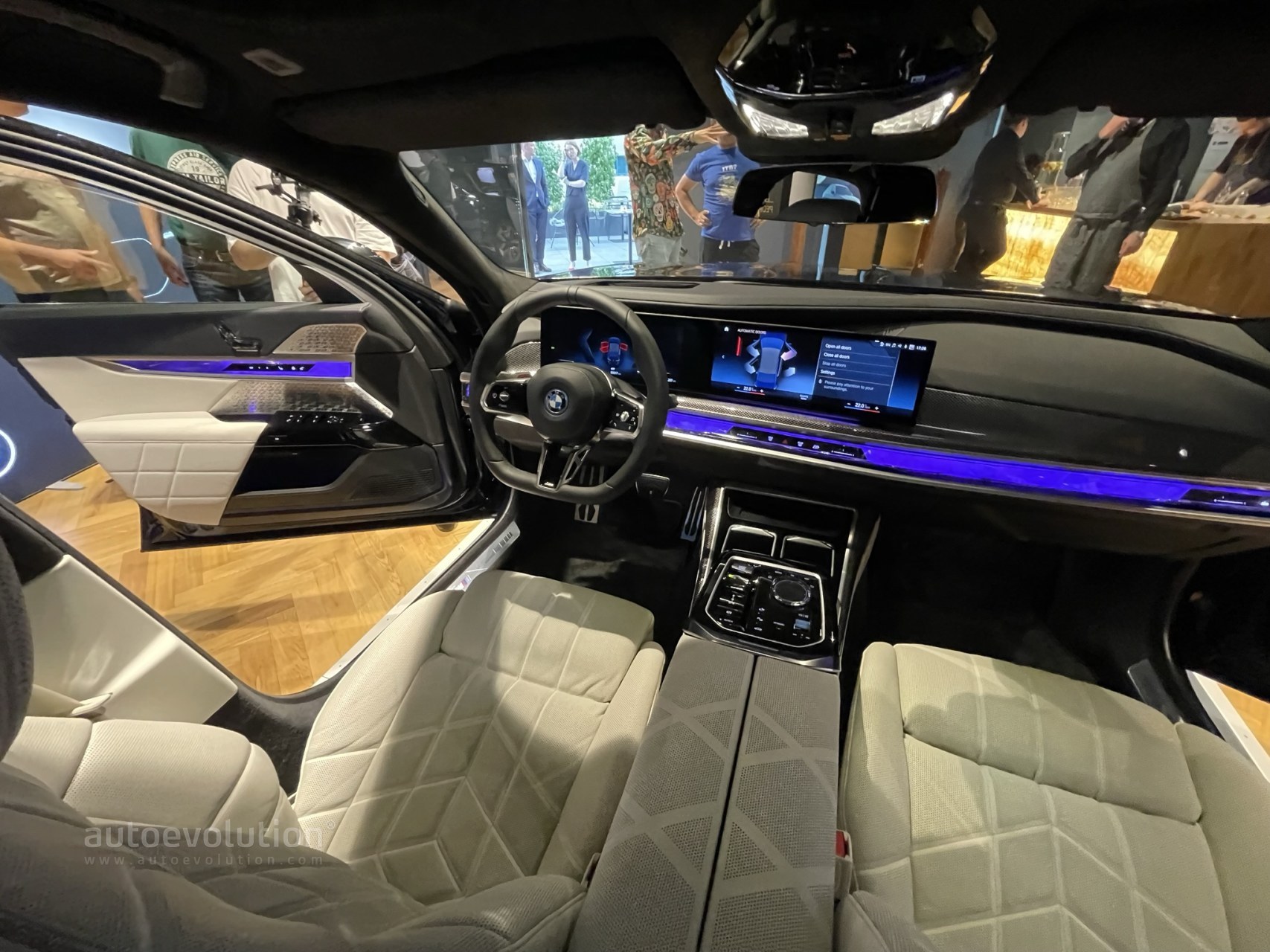