The 992 Turbo makes its first undisguised appearance on Instagram

Here's the 992 generation Porsche 911 Turbo way before you're supposed to see it, folks. Porsche fan Todd Schleicher posted a photo of what definitely looks like the next-gen 911 Turbo sitting on the factory floor on Instagram.

It's relatively easy to verify that this is in fact a Turbo, because the distinctive styling elements match perfectly with those of a 992 Turbo we saw in spy shots last year. The squared-off exhaust tips we saw in those photos have made it to a more finished version of the car, it appears. Porsche's automatic deploying spoiler looks to be about the same shape and size on this leaked photo, too.

Nothing looks particularly surprising on the Turbo. Porsche never departs too far from the traditional 911 styling for its higher powered Turbo variant, and that continues to be the case here. Wider hips and a definite added dose of aggression is on tap, but details will have to wait for the car's debut. It is cool to see further variations of the rear end with the wraparound taillight Porsche has adopted for the 992. The grey paint and black wheels on this car looks especially menacing from the rear three-quarter view.

It's possible we'll see this car debut at the Geneva Motor Show, with how finished it's looking in this photo. However, if not then, we'll likely have to wait for Frankfurt in September. Porsche will continue to dole out variations of the 992 over the next couple of years, so there probably isn't any rush on the Turbo, given we haven't seen most of the lineup to come.

There's always the far-out chance the photo isn't 100 percent genuine, but we're pretty comfortable calling this the Turbo for now. We're digging the styling, but we imagine whatever lightning-quick acceleration times it'll post will be even more satisfying. 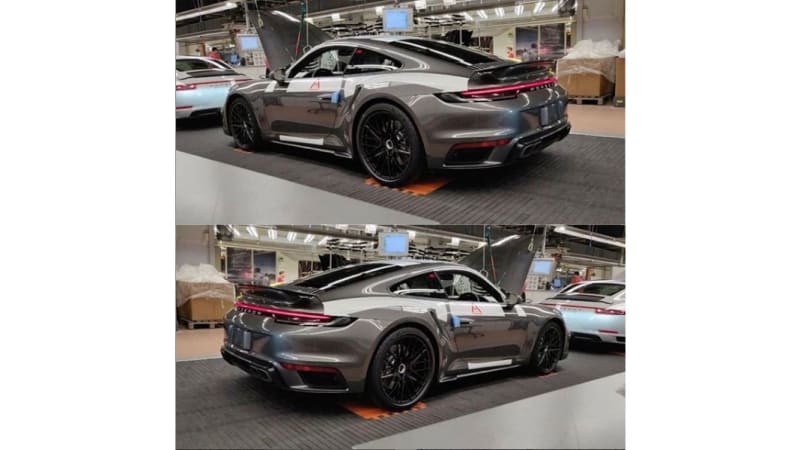