Black FridayferrariRomâniasupercars
Deep down inside, we all know that Black Friday is meant to kick the customer’s emotional side into overdrive.

The shopping spree mania is full of false discounting thanks to inflated and deflated pricing strategies, the kind of practice that turns the consummate consumer into a skeptic overnight.

Black Friday can also be deceiving in the automotive realm, as proven by the biggest online retailer in Romania. eMAG announced that it's partnering up with a few dealerships to sell cars through the store's marketplace, and the biggest offender is this Ferrari GTC4 Lusso from 2018.

Offered at 263,000 euros on eMAG, the listing for the Italian grand tourer doesn't mention the mileage nor does it feature real-world photographs of the vehicle in question. Only six press photos are offered, but that didn't stop us from going down that rabbit hole to find out more info about the car.

Plus Autotrade SRL is the name of the company that operates the dealership selling the GTC4Lusso, headquartered in an apartment block in downtown Bucharest. The financial situation of Plus Autotrade isn't exactly encouraging because the net profit for 2018 is 6.5 times lower than the company's debt.

Heading over to their website, the Ferrari is listed for sale at 258,823 euros, real pictures and all that jazz. That's a difference of 4,177 euros, and no, the dealership doesn't mention a thing about Black Friday in the ad. Without further beating around the bush, it's crystal clear that eMAG is pocketing the difference in pricing while the customer doesn't benefit from any discount.

The local media reports that the car was reserved for 1,000 RON (equivalating to 210 euros) two times today, but at the time of writing, the GTC4Lusso is back on eMAG with the same truncated information as before. Plus Autotrade says that the car has 450 kilometers (approximately 280 miles) on the odometer, and the first registration is dated March 2019.

God only knows how the vehicle was driven until today, and the dealership doesn't even mention if those kilometers were used to demo the GTC4Lusso to prospective customers. Revving the naturally aspirated V12 while the engine is still cold isn't exactly an encouraging thought...

On that note, Black Friday deals have once again been proven to be nothing more than myths. "Discount" is an extremely powerful word from a psychological standpoint, and the problem doesn't lie with the companies who profit from discounted items. It's the consumer - us folks - who should think twice before the purchase, and two questions have to be posed before entering one's credit card information. 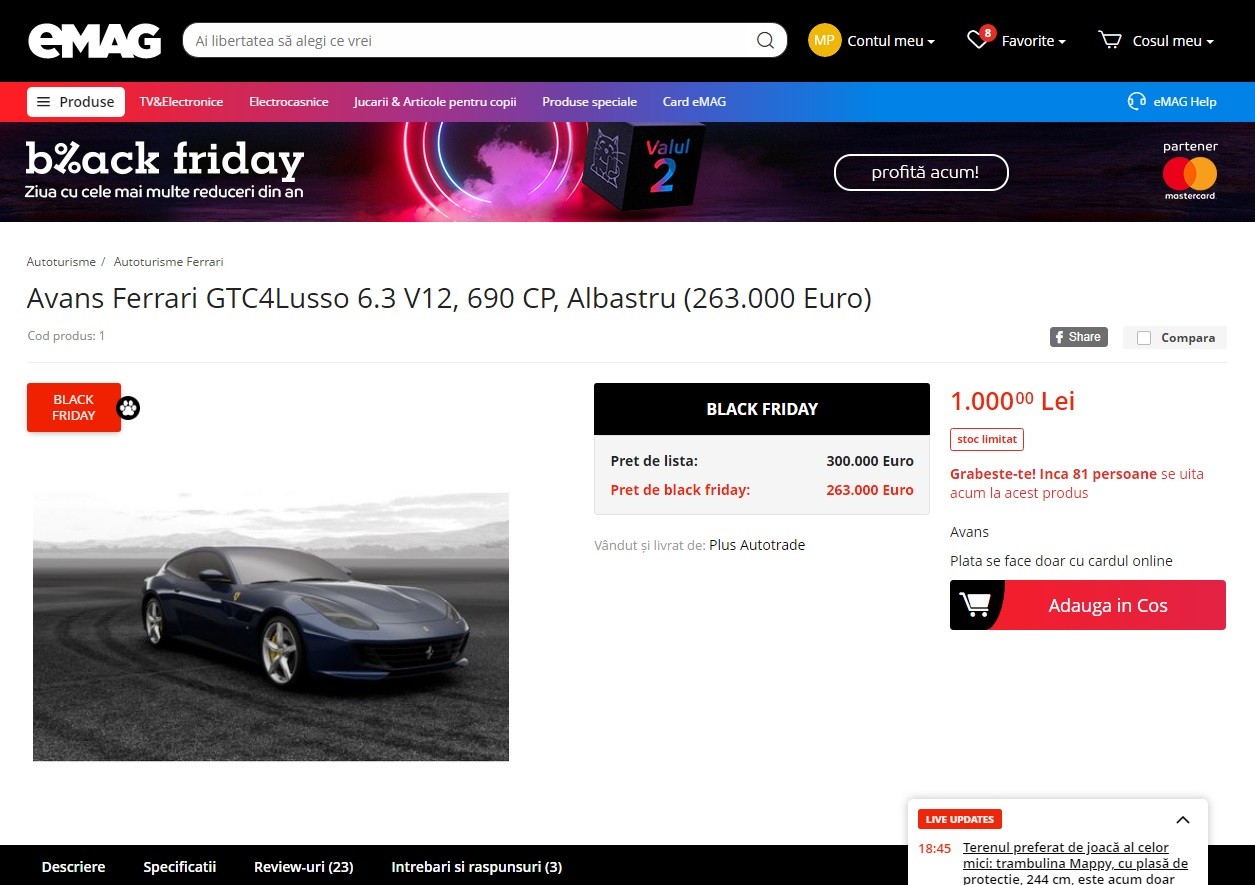